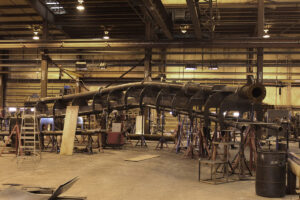 Manufacturing excellence in the amusement industry

The company’s experienced team of engineers and designers use their imagination, creativity, skills and tools to translate ideas for roller coasters, rides and people movers into reality. Every concept gets proven out with a working prototype that undergoes rigorous testing and establishes manufacturing specifications. They are at the forefront of manufacturing, and they utilize their 40 acre fully-integrated facility in to give them the ability to complete assembly to their customers’ exact specifications.

“We purchased our MEGA HORNET 3000 in the fall of 2011. Beveling was a big reason we purchased the machine. We use it for all rides, but we have done some neat stuff for the sky wheel on the machine. We have been very satisfied with this purchase. The relationship we developed during the installation and after the sale has been invaluable, and for the most part the service we have received has been very good. As a result, we were interested in their new ROTO HORNET 1000 pipe cutting machine when it first became available in 2013. The pipe cutter has been a good addition to our capabilities. Parts that were taking us over four hours to make can now be produced in a matter of minutes.”
–Production Manager

This company is an excellent example of Hornet Cutting Systems’ commitment to and relationship with their customers. Hornet Cutting Systems is considered one of the top manufacturers of CNC profile cutting machines because of their pledge to quality precision, manufacturing and service. They manufacture lines of CNC thermal plate cutting, waterjet plate cutting, and thermal pipe cutting machines that are in use all over the globe.